One way of creating a sitcom that works is to have a "Center & Eccentrics" show. The first example of this I can think of is the ANDY GRIFFITH SHOW. Small-town sheriff Andy Taylor was the anchor character. He was the normal / eyes of the audience character and we entered the show through him. Griffith told home spun stories and the writers faced the problem that he's just not that funny a guy. By the way, folks that worked with him said, "Don't confuse Andy Griffith with Andy Taylor." His FACE IN THE CROWD character may have been more accurate than his fans would like to admit.

Back to the series creation, facing a fairly dull lead they surrounded Andy Taylor with a list of oddballs. Each of them had a defining characteristic. Don Knotts at the deputy was overeager. Otis was the town drunk. Jim Nabors played the dense mechanic. Floyd the barber was.... deliberate. Think of Andy in the center of this solar system of characters with the loons orbiting. And Aunt Bee was the sun.

Mary Tyler Moore was a talented comedic actress but she likewise was a "normie." So for the MARY TYLER MOORE SHOW they surrounded her with very sharply defined characters. The dense Ted Baxter was one of the all-time great sitcom characters, played wonderfully by Ted Knight, and again the formula worked. Lou Grant was the gruff boss. Murray the friend who loved to insult Ted. Rhoda the perpetually single. Phyllis provided a mirror character to Mary as she was married to a dentist and miserable.

TAXI had Alex Reiger in the anchor role surrounded by not one but two of the all-time great eccentric characters: Andy Kaufman at Latka and Christopher Lloyd as Reverand Jim. The crazies basically took over that series and account for the best episodes of the series.

CHEERS had Sam Malone as the center character. Around him were the "dumb guy" characters of Coach and later Woody. Cliff Claven was Mr. Factoid, most of which were inaccurate. Norm was the bar guy everyone liked. Frasier the intellectual. Diane the love interest who aspired to be an intellectual but found herself attracted to Sam in a HIS GIRL FRIDAY-style romance. Great series.

This is one approach if you're creating series pilot. Create a layered main character and then toss in the supporting characters to provide the laughs.

Posted by Stephen Hoover at 9:31 AM No comments: Links to this post

I've got a link that gives both me and the person that uses it a discount for Fiverr. Great providers (just look for the top rated) for script coverage, editing, etc. etc.

Check it out. Thanks.

SULLIVAN'S TRAVELS is one of my top 5 films and I came across this unique autographed photo of Veronica Lake on eBay last month - way out of my price range but I saved the image.

It must have been to someone she knew (family or a friend pre-stardom) as she signed "Connie" (her real name was Constance Ockelman) under her stage name.

Sadly, Lake would die young at 51 after struggling for years with alcoholism. 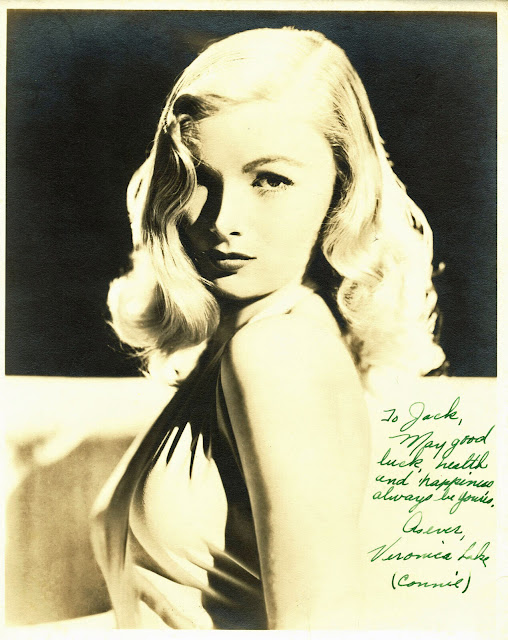 Posted by Stephen Hoover at 3:17 AM No comments: Links to this post

Posted on YouTube (and likely soon to be removed) is an unaired pilot for a Judd Apatow-created series. Get this cast: Jason Segel, Amy Poehler, Kevin Hart, and January Jones!

Okay. Now that you're back. Judd has a great eye for talent. His series FREAKS & GEEKS launched a generation of comic performers and likewise this is a stellar cast. Traditionally, it's said to be a bad idea to do a show or film about the industry. Whereas a show like ENTOURAGE engaged in wish fulfillment, NORTH HOLLYWOOD is about the lower-level wannabe side. There's real chemistry among the characters, especially in a scene ten minutes in where Amy and Kevin encourage Jason to try out for a film role.

The premise of NORTH HOLLYWOOD is a struggling group of actors and comics form a friendship while searching for their big break. Opening with the struggling actor Segel playing Frankenstein at a kids' park is funny but I'm sure the network objected to the main character being a loser or unlikeable (ugh) because he scares a kid. And, yes, he should be referred to as Frankenstein's monster and screw you for reading books.

Poehler plays an assistant to actor Judge Reinhold. Judge does a good-natured turn playing off his film roles and working out a plot to BEVERY HILLS COP 4 with Kevin Hart's character. A laughable suggestion that Kevin (who smartly uses his own name on the show) takeover the lead to the series as Eddie Murphy's cousin doesn't seem so absurd in 2020.

The pilot clocks in at 35 minutes. Most TV shows on network at the time were 22 minutes. These days the show could have found a home on streaming and all ten episodes dropped at once online. But it was a difficult sell with the network. The now stars were relative unknowns and it may have been viewed as too 'insider' to appeal to a mass audience.

Interestingly the four members of the ensemble met at an acting class. BARRY successfully set a series at a Hollywood acting class decades later. Another show exploring the wannabe side of stardom is the amusing PARTY DOWN.

Give it a watch while it's available as the show is an important step in Apatow's development before he would dominate comedy in the 2000s. The exploration of outcasts, wannabes, losers, and comedy based on real life painful events were all part of this pilot.

Posted by Stephen Hoover at 6:11 PM No comments: Links to this post

If you watch MTM produced shows (MTMS, TAXI, etc.) you'll hear a distinctive "Haw!" laugh. Ken Levine's blog (Hollywood & Levine) verifies that the laugh is that of James L. Brooks. One of the times I had an opportunity to speak to Brooks I asked about it and his friends laughed knowing it was him. Brooks said, "What crazy laugh?!"

I'd read they had brought in a guy to TAXI who had a distinctive laugh or it might be Lorenzo Music (another producer). (See below.) Why do that? We know the "laugh tracks" that television shows use to tell the audience: Laugh here! Cavett discusses a man who did this who brought in a 'magic box' and played the laughs like keys on a piano -- a guffaw here, tittle there, and large laugh there.

The psychology is this: People are embarrassed by their laughs. Laughing is something we give into and people have distinct laughs. Some are high pitched, strange, and everyone has a bit of self-conscious about laughing. With one person in an audience giving in to enjoying a laugh. The signal is: "Enjoy this. No matter how crazy you think your laugh is I got ya beat." Even the laugh itself is a reason to laugh if it's very distinct.

A truly funny movie (Marx Brothers at their best) will make me laugh even if I'm alone. But there's an effect of an audience enjoying a comedy as a group that's especially enjoyable. The largest laughs I've been a part of in the movie theater were screenings of BLAZING SADDLES, AIRPLANE! and SOMETHING AOBUT MARY. All three had my audience (and me) falling out of their chairs laughing.

Posted by Stephen Hoover at 7:55 AM No comments: Links to this post

My Books on Amazon 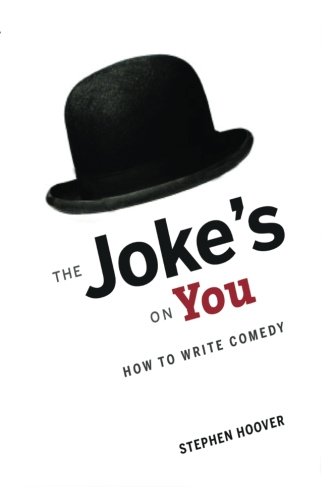 Stephen Hoover
Any Town, USA
Screenwriter specializing in comedy and thriller genres. . My day job is lawyerin' here in fly over country. I'm also a musician (guitar) interested in everything from garage punk to Americana and other roots music.